Data Center Efficiency: You Can’t Change What You Can’t Measure Today’s data centers are taking the heat both literally and figuratively. With equipment generating enormous amounts of thermal energy, data centers continue to shovel operational funds into cooling as energy costs steadily climb. Environmental optimization is so demanding that Emerson Network Power cites that cooling and energy make up 44% of the average data center’s cost of ownership. These shocking levels of energy consumption have led to much rebuttal in the media — particularly the negative environmental impact of the data center industry’s staggering 200% increase in power consumption between 2005 and 2010 in addition to the more modest, but nonetheless concerning, 36% increase between 2005 and 2012 . As an April 2014 Scientific American article recently asserted, “To avoid becoming energy hogs and concomitantly adding more greenhouse gases into the atmosphere, these data centers need to smarten up, literally, using new approaches.” Accomplishing each of these critical objectives leads to an increased thermal output, requiring further energy to cool the environment. This proverbial ripple effect occurs with each attempt to remain competitive within the rapidly evolving data center space. The addition of the right intelligent environment monitoring system will replace a seemingly inescapable chain of costs and inefficiencies with savings and smarter management. The right system provides the insight needed to lower energy consumption. Advanced environmental monitoring technology is also able to optimize data center infrastructure, reduce downtime risk, and provide the metrics needed to publicly demonstrate that your company has lowered its carbon footprint — all benefits that ensure return-on-investment (ROI) and that the savings will continue to increase. 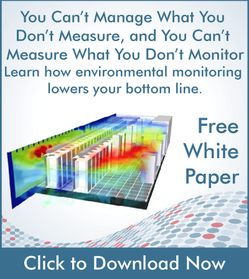