The infamous New York Times periodical The Cloud Factories was a tirade against the (supposed) modern equivalent of the coal power plant, the data center. The residing image was a hot, energy-waster, a vision that still remains today.

This is a misplaced example of misrepresentation and inaccurate press sensationalism.

It demonstrates that the public, press included, understand little about how data centers function, are regulated and the drivers behind improvement. In the past facilities were wasteful and some still consume significant amounts of energy, but inefficiency is becoming a thing of the past.

The data center sector is striving to improve its long-term impact through globally coordinated regulation, efficiency strategies and operational transparency. Change is occurring at all levels. Facebook has made its data center design and operational systems open to public scrutiny, renewable energy is now a real fuel alternative in certain regions, and compliance is keeping the heat on businesses rather than their IT equipment.

The sheer level of change occurring highlights the united front against environmental damage and financial waste.

Regulation is the first step behind any shift in operational process, which is why the U.S. Department of Energy has committed to educate federal data center operators around environmental best practice. This centralized governance intends to reduce energy usage 20% by 2020. If the initiative is effectively adopted, energy savings could reach 12 billion KWh/year, 2% of the entire country’s annual lighting volume ($2 billion potential savings).

Data centers have a social responsibility to slash their power intake, as current usage levels are unsustainable. Global energy consumption is expected to reach 41.86 quadrillion BTU in 2014 (U.S. Energy Information Administration (EIA)), a 1% increase over 2013; the equivalent of 8 trillion gallons of gasoline or 36 million tonnes of coal.

That is why other regions focus on hard compliance. The EU Commission’s 2012 Energy Efficiency Directive came into force in June, leaving facilities little choice but to invest in technology-led strategies to drive efficiencies across the IT environment. The aim mirrors the DoE; a 20% reduction by 2020 across all sections of the energy distribution chain.

For the UK it is money driving action. The Climate Change Agreement of December 2013 has pushed co-location companies to improve their environmental footprints through financial incentives, a feat made possible by sensor networks that generate real-time visibility. As the report states, “If data centers do not meet targets, they pay the government £12 per tonne of CO2 by which the target has been missed. The financials are quite obvious.”

Organizations have the opportunity to lead by example. Boardrooms do not want to be labeled inefficient and increased competition is leading many businesses to think strategically. They are driving IT to undertake a programme of data center optimization, especially as the positive business outcomes stretch further than green credentials and PR exposure.

ASHRAE guidelines state that a single degree Fahrenheit increase in the data center can yield yearly savings of 2% and when you spend $80 million a year on power like CenturyLink does, that 2% offers vast commercial and reinvestment potential. The average data center could increase temperatures by 10 degrees. That is millions waiting to be put back on the bottom line.

Other examples include Digital Fortress, whose co-location operations are now environmentally stable. With real-time RF Code data, customers have insurmountable proof it is meeting SLA requirements and of its own facility’s sustainability. Elsewhere a leading Hong Kong power company is passing on its savings directly to customers now it has greater operational control.

This should be the image of data centers: serving mankind, not harming it. They do more for our every day existence than nearly any other sector and deserve celebration. Throughout their lifespan, facilities generate thousands of jobs, help local economies and improve our lives. That is a story worth writing about. 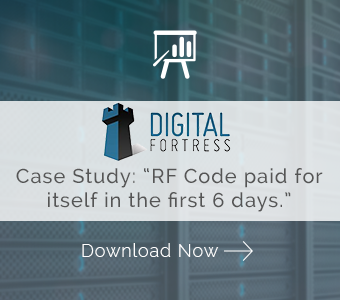